The SunSquabi boys are BACK and at it again! Yesterday marked the release of SunSquabi’s brand new Echoes Remix EP, Hooray for NEW MUSIC!! 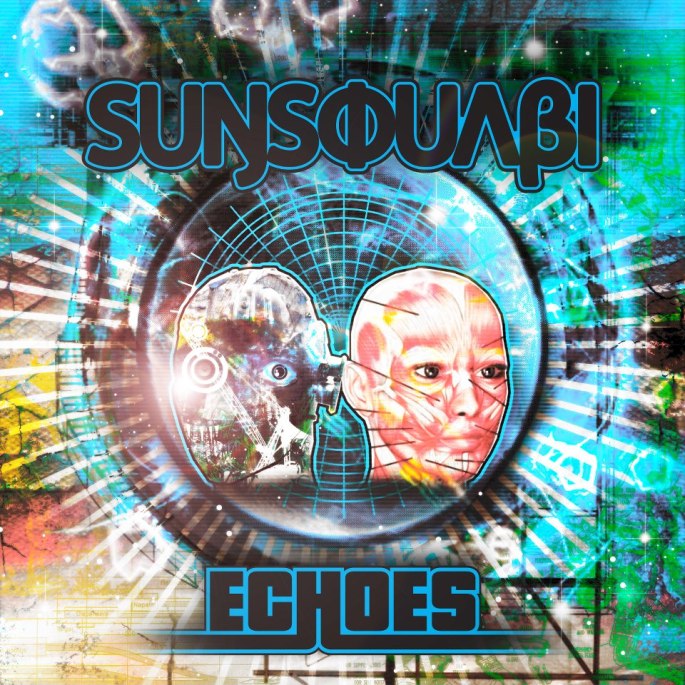 I was lucky enough to receive a special press-only release of the Boulder based band’s new ep and had about a million different echoing thoughts flow through my head as I listened in awe to the swirling mixture of old songs but entirely new rhythms, alternations between high tempo versus mellow groove, and an entirely new progressive addition to this bands already stellar repertoire of crowd pleasing jams!

From the sounds of it their incorporation of old songs like Lenny Kravitz “Fly Away” , with a liquid-funk fusion of live instruments and electronica just seems to continue to jell with what today’s fans and festival goers are  looking for in a live band. People love to hear old songs that they know and love with a new spin! That said, taking an already written piece of music and making it yours can sometimes be no less of a challenge than gutting and remodeling an old house.  It is because of this ability to both create original tracks as well as incredible remixes that they are quickly establishing themselves as a force to be reckoned with! Not only in the local Colorado music scene, but also in the Jazz-Funk music scene around the country, their recent ventures have taken them to a number of different cities (AUSTIN!) and festivals around the country i.e. Snowball, Wakarusa, Summer Camp, River Beats, and WELCOMEFEST.

SunSquabi consists of Chris Anderson on drums, Kevin Donahue on guitar and production, and Andrew Clymer on bass and production. I have to say, I wasn’t really sure what to expect when Chris came to me with a remix only album. I was unaware that they had even been working on a new album and   hadn’t even thought too much about how good some of their prior remixes were, for example, Paper Diamond’s “Can We Go Up” off SunSquabi’s  Catastrophic EP.

The first song on the album is a well done Daft Punk remix titled “Voyage” and its melody reminds me of just that! It’s a slow starting crescendo heavy journey through space, time, and sound. Like the slow start of an engine, or MUSICAL MACHINE in this case, each minute of the song gets a little more and more funky and incorporates more guitar sound that “echoes” back and forth with the steady drum rhythm to keep the train moving.  If I had any doubts at all about how good the rest of the album was going to be, they were quickly squashed 35 seconds into the second song when Lenny Kravitz’s 1998 hit fades in and I feel myself starting to sing about flying away and can simultaneously can feel my spirits start to lift and my faith renew. SunSquabi’s “Fly Away” remix is fighting hard for a spot as my favorite new song off the album, the remixed song features a new-style almost reggae-funk influence that makes the song almost two minutes longer than the original track.  The story transitions beautifully from the essence of freedom to the truth of warmth and tone richness in the five-minute long crescendo-heavy medieval love affair that seems to be told in the third song on the album titled “Game of Thrones”.  The song stems from the theme song of, Game of Thrones; a medieval fantasy television series created for the HBO. The series is an adaptation of a book series of fantasy novels titled “A Song of Ice and Fire” by George R. R. Martin. Is Mochipet Evil? That was the question I found myself asking as I listened to the reggae infused hydro-funk electric nonsense of the third song on the EP “Mochipet is Evil”. The title track from Mochipet’s recent 2012 release, the remix features the addition of keyboard, guitar, and drum sounds that blend so well with the vocals on this song that you barely notice that the song is remixed. After listening to the original song a few times I was impressed at how much more I liked the remix, making it a definite favorite off the album. If you were on a hunt for the dramatic high-energy style that SunSquabi’s music has been recognized for having in the past, look no further than fifth song on the album, this song’s sounds directly correlate to its title, “Warrior’s Dance”, this fast tempo Prodigy remix showcases each prodigy musician  with some sort of fast paced defined solo. If SunSquabi’s remix of “Warrior’s Dance” had come out ten years ago I think it would have easily made it onto the soundtrack of the first Spy Kids movie. An uplifting since of comic relief from the prior song(s)s depth is provided by jazzy staccato bump beats and clips of Will Ferrell and John C. Reilly from the 2008 movie Step Brothers in the song “Just the Tip”. I found it hilariously and awesomely daring of the band to use so many different clips in this song and still maintain a really cohesive remix style flowing progression with the rest of the songs on the album.

By the time the train made it to the station and the voyage of echoes was over, it was apparent that the remixed songs genuinely had roots from all over the map! The album is an incredibly cohesive blend for something with the level of variety it incorporates, songs ranging from just a few months to 10+ years old, TV theme songs, and movie clips are all used in the new album that sticks together as one unit with ease. The incorporation of many different musical styles, heavy bass lines, guitar riffs born from the heart of rock and roll, and rolling deep drum solos offer an overall progressive hydro-electro-funk soul sound.  My only real complaint is that the album wasn’t longer!

If you haven’t seen them in concert already, Do yourself a favor and keep your eye out for their next live performance.  I can’t wait to hear them play their new EPs tracks live when they open for Zoogma at the Bluebird coming up this October!

CHECK THEM OUT ON–>

This site uses Akismet to reduce spam. Learn how your comment data is processed.